The soundtrack of Bulgarian folklore consists of the sounds produced by five main instruments: the gaida, the kaval , the gadulka, the tambura and the tupan. 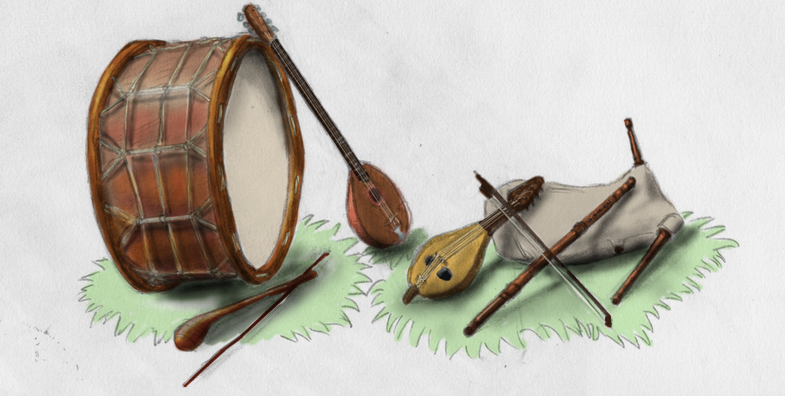 The gaida is a wind instrument. It consists of: “duhalo” (blowpipe), “ruchilo” (drone), “gaydunitza” (chanter), and a bag made of billy goat skin. The gaida is used both as a solo and an accompanying instrument, and is found in two varieties: a big one (kaba gaida), which is most popular in the Rodopi mountains, and a smaller one (djura gaida), which is widely used across the other folk regions.

The kaval is a wind instrument, which is most often made out of wood. In today’s modern world, a kaval made from other materials can also be found. Usually it’s made of cherry, box, plum or cornel wood. It’s 50cm to 90cm long. It consists either of a single pipe or of three separate ones, wedged together. The kaval is used both as a solo instrument and for accompaniment. This instrument is played all over Bulgaria, but it’s most characteristic for the Thrace and Dobruja folk regions.

The gadulka falls under the category of bowed string instruments (where the sound is produced by rubbing a bow over the strings). It’s pear shaped and could be made out of different kinds of wood. It usually has three or four strings, but some have up to 16 extra strings, which are not to be played directly, but rather used as resonators. The bow is arched and on it a tuft of horse hair is stretched. The gadulka is popular both as a solo instrument and for accompaniment, and it’s widespread across all folk regions, but it’s most common in the Thrace, Dobruja and Shopluk regions.

The tambura falls under the category of plucked string instruments (where the sound is produced by plucking the strings). In the different folk regions it has various names, like “drunka", “baylama” or “bulgarìa", for example. The tambura is made out of walnut, willow or cherry wood. The most used variety of the instrument is the one with four pairs of strings, but in general it could have anywhere between 2 and 12 strings. The tambura is used mostly as an accompanying instrument and it’s most popular in the Macedonian and Rodopi regions.

The tupan is a percussion instrument, which consists of a “kasak" (the drum’s shell) and two leather membranes, stretched and held down with a rope. When those membranes are hit, they vibrate and that’s how the sound is produced. Different sizes of tupan can be found. The instrument is played with the help of one thin and one thick stick (“klechka” and “kiyak”), and different rhythmic combinations are played. The tupan is widespread in all of Bulgaria, but it’s most characteristic to the Macedonian folk region.


Back to the blog