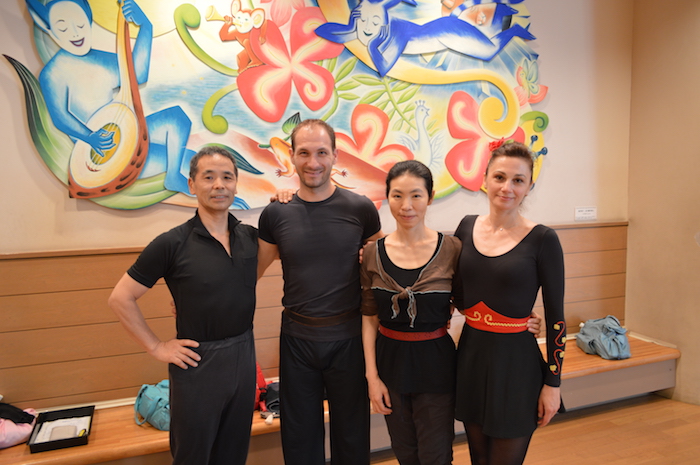 Today we’re going to tell you the story of a long standing partnership, which has left a deep impression on us. Namely our friends Eiko Yabuki and Naoto Irisa - leaders of the “Koga” School in Tokyo, Japan.

The founder of the school, Naoto Irisa, first started being interested in dance in the 1970s in Japan. It was there, at a party where international folklore was presented, where he was first introduced to Bulgarian folk dances. He fell in love with them instantly and decided to learn more. After a lot of difficulties, he finally managed to come to Bulgaria in 1978, where he started studying folk dances - first in Sliven and later across the entire country. Since then, he’s been coming to our country almost every year, often bringing with him other lovers of folklore, so that he can introduce them to our folklore.

And this is how we met them as well.

“I’ve known them since 2000 - 15 years already. They came to visit the National School of Dance Art and came in my class. Turns out we made a good impression, because they later came to my classes at the ensemble as well. After that they invited me to Japan” - remembers Iliana.

Through the years we’ve kept in touch and worked together multiple times, the seminar having established itself as the optimal work format. Japanese like our method of teaching and the material we offer them - Bulgarian folklore, presented in an accessible for the foreigners way, a seminar program, enriched with demonstrations and performances.

“In 2010 Iliana invited me to work with her during a seminar with the Japanese group in Bulgaria” - remembers Ivaylo.- “I’d heard form her bout the seminars she’d carried out for them in Japan and that they are huge perfectionists. And she’s different from other teachers - she does a lot of demonstrations and dances side by side with everybody else, so I knew the Japanese would be appraising me in the beginning, comparing me to her, and I’d have to give my best”.

Mr. Irisa and Eiko invite both of them to hold a seminar in Japan.

“Trough the years in the ensemble I’ve had the opportunity to observe other Japanese as well, but the “Koga” group are different from their colleagues” - Ivaylo continues.- “They try to feel the Bulgarian soul, to feel the dance and present it in the most authentic way - their attitude towards dance and their way of thinking are unique. Going to Japan, Iliana had prepared me for how exigent they are and the difference, compared to their colleagues, is astonishing. I believe that, when it comes to that, they're leaders in the field in Japan. Eiko was the one who amazed me the most”.

“Eiko has been studying me for a long time with such precision, that even I am amazed by what she’s achieved. They definitely carry in them the love for this hobby of theirs and they're devoted to it to such extend, that they're often more skilled than some of our professionals” - adds Iliana.

After the last seminar they carry out in Japan, Mr. Irisa is delighted and wants to realize more projects like this. Iliana and Ivaylo also share their impressions from the experience.

“I was impressed by the organisation - everything surrounding the event was thought through and taken care of. Also the respect they showed toward us as teachers and toward dance in general. Some of the the participants, apart Bulgarian folklore, also had affinity towards other folk dances, they're really open to learn. Everybody liked the percussion instruments, especially the tupan - says Ivaylo.- “There’s no age limit within the dancers. Even the older ladies move very well and have amazing stamina. Their attention to detail is astonishing”.

“For the Japanese it was important that, apart from being teachers, we’re also performers. And after a six-hour-long seminar we all felt great, charged with a lot of positive energy. It was exiting to meet people, thousands of kilometres away from us, who embrace us in such a way” - says with a smile Iliana.

Back to the blog